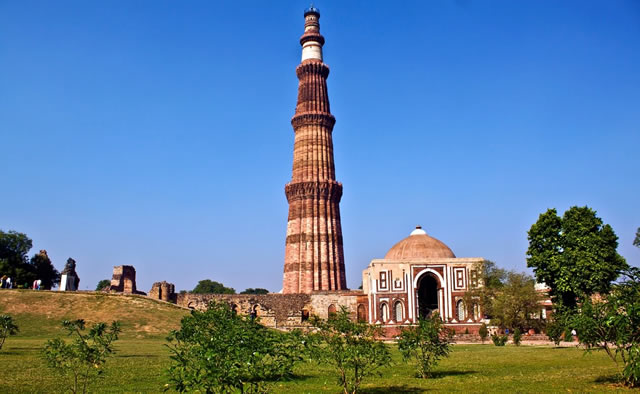 DELHI
Morning: Sightseeing tour of New Delhi. New Delhi is the blend of old and new. You will first visit the Qutub Minar complex, a UNESCO World Heritage Site, built by Qutub-ud-Din Aibek in 1199. He built the Qutub Minar and Qutub Jami Mosque by destroying 27 Hindu and Jain temples. The Minar is about 230 ft. high with a spiral staircase that has 379 steps. Qutub-ud-Din died in 1210 without completing the minaret. Later Islamic rulers completed, renovated and repaired it. Later, proceed to Humayun's Tomb (UNESCO World Heritage Site), built in the 16th century as a memorial to the Mughal Emperor Humayun. Bega Begum, also known as Haji Begum, the Persian wife of Humayun, supervised the construction of the tomb for her husband. Humayun's Tomb was the first building to be constructed during the reign of Akbar. The mausoleum was built from 1562-1572 AD with the help of a Persian architect, Mirak Mirza Ghiyuath. Thereafter, drive through the new imperial capital designed by Sir Edwin Landseer Lutyens and his assistant, Herbert Baker. A majestic, tree-lined and broad avenue was placed in the center of the new capital. At its eastern end a royal and raised pedestal with an Imperial Canopy covering the statue of King Emperor George V was installed. At the western end was the impressive Viceroy's mansion that now serves as the official residence of the President of India. To the east of the Viceroy's mansion were the south block (now Prime Minister's office) and north block (now Home Minister's office) of the central secretariat on either side of this avenue that was originally called the Kingsway. Its name was changed to Raj Path after independence of India. The circular building of the council chamber was built in the northeast of the central secretariat. It serves as the Parliament of India now. When the construction of New Delhi started, the memories of the First World War were still lingering.

Afternoon: Continue with sightseeing tour of Old Delhi - Shahjahanabad. Old Delhi still has the influence of Mughals with monuments, mosques and forts all through the complicated streets. Visit the Masjid-i-Jahan Numa, commonly known as Jama Masjid, which is the principal mosque of Old Delhi. Commissioned by the Mughal Emperor Shah Jahan and completed in the year 1656 AD, it is one of the largest and best-known mosques in India. It is also at the beginning of a very busy and popular street/center in Old Delhi, Chandni Chowk. Masjid-i-Jahan Numa means "the mosque commanding a view of the world", and the name Jama Masjid is a reference to the weekly congregation observed on Friday (the yaum al-jum`a) at the mosque. The courtyard of the mosque can hold up to twenty-five thousand worshippers. From here, we will take you on Cycle-rickshaws through the little lanes of the old town, where time has virtually stood still for hundreds of years. This ride will be most fascinating as you get a first-hand view of the merchants, the little food and artifact stalls and the teeming population, busy in their daily activities.Later, proceed to Raj Ghat, the serene memorial of Mahatma Gandhi, and then back to the hotel. Overnight at the hotel.